Are There Good Reasons for Your Bad Feelings: Interview with Randolph M. Nesse

Our relationship with mental health is typically based on challenges we’re currently experiencing — but what if our current issues are rooted in the distant past? Often overlooked is the fact that our predispositions for conditions like depression and anxiety have existed for millenia. From an evolutionary standpoint, why haven’t these detrimental traits and behaviors been filtered out and how might they affect us now?

Randolph M. Nesse, MD, a founder of the field of evolutionary medicine and author of recently-published Good Reasons for Bad Feelings, helped us understand the gap between human physiology and modern environment, and how we can apply this field for better therapy outcomes.

First, tell us a little about yourself and your background?

I was a professor of psychiatry for 40 years at the university of Michigan where I helped to develop one of the first specialized clinics treating patients with anxiety disorders. In the early 1990’s I collaborated with the biologist George Williams to write a series of papers and the book Why We Get Sick, which inspired much new work in what is now the thriving field of evolutionary medicine.

Five years ago I moved to Arizona State University to start a Center for Evolutionary Medicine and the International Society for Evolution Medicine and Public Health. It has been thrilling to see evolutionary principles finally used to better understand and treat disease. There are now more than a dozen books on the topic, and most research universities have courses on evolutionary medicine.

But medical schools still do not recognize that evolution is a crucial basic science just like genetics and physiology, so I have a lot of work yet to do. Applying evolutionary biology will eventually improve human health more than any specific medical discovery.

Can you describe the idea for Good Reasons for Bad Feelings? How did you get interested in the topic and how did the book come about?

I have always been interested in why bodies…and minds…were not better designed.

Most everyone has wondered why there is so much suffering in the world; it is an ancient question. But real answers can come from asking the question in an evolutionary context. Why didn’t natural selection eliminate the genes for depression, schizophrenia, eating disorders, anorexia nervosa, and autism?

A crucial part of the answer is that bad feelings like anxiety and low mood are symptoms that can be useful, just like pain, fever, and cough. More of an answer comes from recognizing the misfit between our minds and our modern environments. Now that evolutionary medicine is on solid ground, it is ready to be applied to mental disorders, where such insights are so desperately needed. 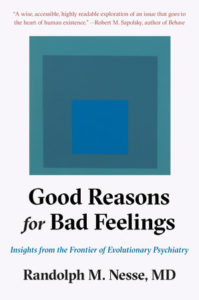 How has your evolutionary psychiatry research transformed the treatment of specific mental health conditions?

Evolutionary psychiatry is not a method of treatment. Like genetics and neuroscience, evolution provides a crucial foundation but not a quick fixes.

That said, when patients and doctors recognize painful emotions as having utility in some situations, that makes everyone respect the emotions more, look more carefully at the life situation, and it helps patients to not feel that they are defective or weak.

For panic disorder in particular, telling patients it is a false alarm in a normal emergency system is all some of them need to quit worrying about their symptoms, which often makes them go away promptly.

For depression, asking a special question often gets to the root of the matter. “Is there something terribly important you are trying to do that just is not working but you can’t give up?”

For addiction, it is useful for people to understand that drugs found only in modern environments hijack normal learning mechanisms.

So, instead of offering quick fixes, evolutionary psychiatry offers a deeper understanding that transforms our view of what mental disorders are.

What remnant from our evolutionary history has the biggest impact on our mental health?

The ability to learn is marvelous, but it is a chemical system, so drugs can hijack it, turning people into zombies.

Our ability to adapt to famine by gorging is was useful way back when, but in an environment where people try to control their eating, it can lead to eating disorders.

But perhaps the biggest remnant is our evolved intense desire for social power and recognition; it can never be fully satisfied, so we are constantly striving, successful at times, often frustrated, and sometimes depressed.

Or what are some of our most maladaptive behaviors and how can we mitigate them?

Many of our desires for sex, status, and resources benefit our genes at a great cost to us. Jealousy and anger can also be useful, but they are so destructive.

If only knowing this allowed us to set such useless feelings aside! But recognizing that they are for our genes, not us, does help.

What role can psychotherapy play in regulating maladaptive modern emotions?

Changing the situation or the view of the situation, via psychodynamic therapy, family therapy, cognitive therapy, or behavior therapy can transform a person’s life. If it was simple, people would do it themselves long ago. But with help, and encouragement to take risks, many people can identify what it is that they are trying to do that is not working, and then find a new path to the goal, or take time off from the goal, or put efforts into more useful actions.

Conducting a Review of Social Systems, as described in the book, provides a foundation that can make any kind of therapy more effective.

Is evolutionary psychiatry useful for research?

Its greatest utility is for research that will find causes and cures.

Recognizing that negative emotions are useful transforms the search for causes from looking for brain abnormalities to looking at how emotions are regulated and the several evolutionary reasons why they are often excessive. It transforms the search for medications from one looking for substances that replace missing chemicals, to one that finds drugs that block the mechanisms, the way drugs block pain.

This also provides a framework for better studies to find brain mechanisms. Even the search for genes that cause diseases is transformed by an evolutionary view.

Randolph M. Nesse, MD, is a founder of the field of evolutionary medicine and co-author with George C. Williams of Why We Get Sick. He served for many years as Professor of Psychiatry, Professor of Psychology and Research Professor at the University of Michigan. He currently is the Founding Director of the Center for Evolution & Medicine at Arizona State University where he is also a Foundation Professor in the School of Life Sciences. He is a Fellow of the Association for Psychological Science, a distinguished Life Fellow of the American Psychiatric Association, and an elected Fellow of the AAAS.

How to Own Your Instincts (and Beat Your Insecurities)

Am I Being Assertive or Stubborn? 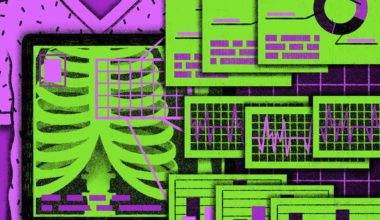 Clinically Reviewed by Cynthia V. Catchings LCSW-S
This post, Donate Your Health Care Data Today, was originally published as an opinion piece in The New… 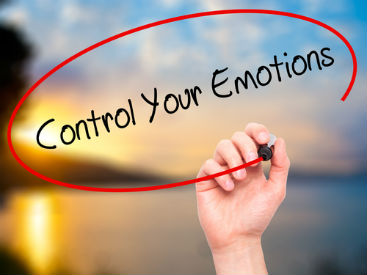 Read More
Published on: 26 Jan 2016
We often believe we are at the mercy of situations and events. The long line at the bank… 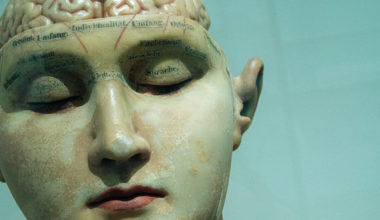